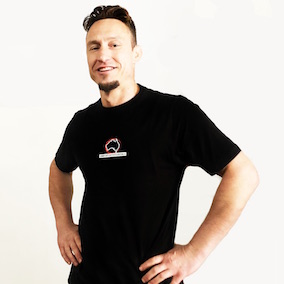 Oliver 'The Outlaw' Olsen has been training in Muay Thai for most of his life, and comes from a family of fighters, with his cousins all having fought for national Muay Thai championship titles. Oli trained extensively in Thailand, and is well known for his long and successful career as a Muay Thai fighter, which includes 6 state titles, 2 Australian titles and a world title. He also has extensive experience as a top level coach and personal trainer, and has coached many state and Australian champions.

Oli is available for personal training at CAIA, and runs the sparring and fighter classes in kickboxing.

Oli's achievements in Muay Thai include:

Drop in and have a session with Oli if you really want to improve your skills.