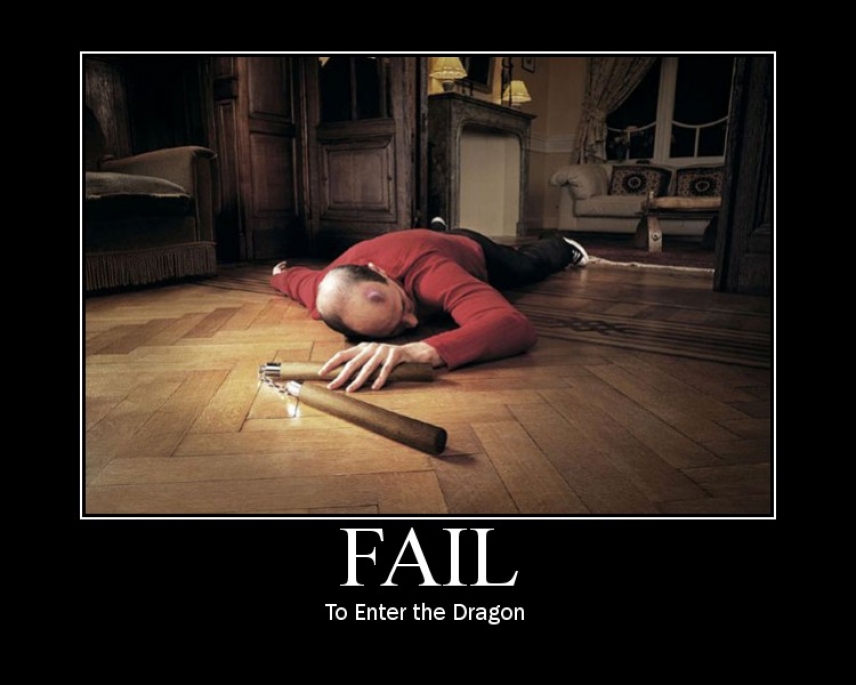 Before I begin, I would also like to once again highlight a couple of things. Firstly, I am very, very fortunate to have an amazing community of martial artists that I train with and greatly respect and appreciate. Secondly, and more importantly, this is not a reflection on any one person in particular, rather than things I have seen and, as much as I hate to admit, at certain times, also things of which I was a culprit. In fact, I can say that I've been guilty of most of today's list at some point in my training...

As you read I hope you have a giggle or two, but at the same time consider whether some of these are too painfully familiar. If you find that reading a particular part makes you feel uncomfrtable, ask yourself if it is because it reminds you of a part of yourself you may not necessary like.

So without further ado, here is the second list of callous coaches, exasperating experts, capricious colleagues, horrifying helpers and more, which make our martial arts journey entertaining, challenging and, at times, frustrating.

2. The Busy Bee – The Busy Bee is oh so very busy. Between work, the kids, studying, visiting relatives, meeting deadlines, bad traffic, worse weather and her mother-in-law’s birthday, it’s really not her fault that she is late for Every. Single. Session. Ever! The Busy Bee expects you to understand that her life is infinitely more complicated than yours, and loves saying things like ‘when you have kids you’ll understand’, or ‘it must be nice to have so much free time’, or other such things that will make it clear that you obviously don't have a job, kids or a university degree and so will never understand what it's like to have a real life. While the Busy Bee will usually, in between excuses (and they are indeed excuses, not reasons), apologise for being late, she will also continue to be late every time. But every 50th class or so, the Busy Bee will arrive on time! Everyone is rejoiced... until she announces that tonight is her husband’s sister’s stepson’s bi-annual, third-term school play, and she has to leave class early and that one day, hopefully, when you've grown up a little, you'll understand why she can't miss it.

3. The Swapper – The Swapper had a -insert colour- belt in another style, but he had out grown it and now wants to learn something new. Or does he? The Swappers will usually stand in the ‘thinking man’ posture while the instructor is demoing or explaining, and will occasionally go ‘hmm’ and nod their head at appropriate intervals. But the Swapper’s real time to shine is when it’s time to start drilling. The Swapper will let anyone within earshot, especially if the instructor is nearby, know how he used to do it back in his old dojo, and keep altering the drills and techniques so that he can do what he already knows how to do, not what he came to learn how to do. Any attmempts to correct The Swapper will undoubtedly result in more thinking man postures and more pronounced 'hmmmm's. When asked about why he’s doing it differently, the Swapper will reply with ‘oh, that’s how we do it in my other style, it’s better because…’. Can we swap you back, Swapper?

4. The Gym Junkie – The Gym Junkie has an admirable training routine. Weights in the morning, martial arts in the afternoon. The Gym Junkie is ripped, and has a cool protein shaker. The Gym Junkie’s nemesis is cardio. Cardio is for sissies who can’t finish the fight in the first round. The Gym Junkie will destroy everyone in the wrestling class in the first round with sheer power and aggression, after which he will generally sit out for 2 rounds before he’s recovered enough to do another half-round. And when it's time for strength and conditioning drills, the Gym Junkie will grimace and pant in agony in gradually increasing decibles until someone asks if he’s ok. The answer will always be ‘yeah, it’s just that it was leg day yesterday and I did 800kgs on the leg press so I’m a little sore’. Hey Gym Junkie, isn’t it a little weird that no matter what day it is or what we do in class, it was leg day yesterday?

And so we come to the end of the second part of the list. Once again I’d like to ensure my gentle readers that this was not written about anyone in particular, but rather a collection of things I have seen and experienced.

And once again, there is a message behind this. There are positives in everything, and we can learn from everyone! The Commentator will probably make a great coach, and shows that he is thinking about how apply what he is learning; The Busy Bee is raising a family while finishing a postgraduate degree while moving up the corporate ladder, and still finds time to train; The Swapper is smart, brave and open-minded enough to try different styles; The Gym Junkie has more dedication to training than most. And while it's easy to see the faults, it's also possible to draw inspiration from these different people. They may need to change some things, but then again, so do all of us. But what can we learn from them?

To think a bit more critically of what we learn, to do a little extra outside of training, to try different things and be open minded or to push through one more round or do one more class when we feel tired. And those things are invaluable in becoming a better martial artist and a better person.